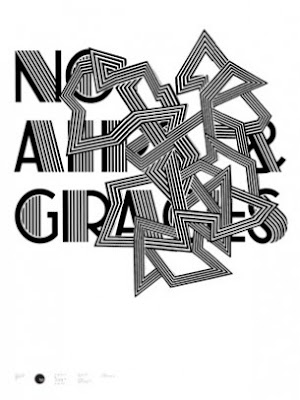 Morag Myerscough can be my Queen whenever she wants. The lady is a maverick, I would say free spirit here, but I feel like those words aren't strong enough to hold her strength of character.

For those of you who don't know, Morag was one of last year's New Blood judges. If I remember correctly, she was on a green background

It's easy to be different and to not want to be part of the crowd and by trying to be an individual you really can set yourself up for failure. But that is what I liked about Morag, she is succesful, like really successful and flipping creative. She does things because she wants to and they work. She reuses things and creates on very low budgets, and sourcing from Ikea and ebay. She doesn't waste a good idea quote.

She started with her likes or rather obsessions, like tomatoes when her three plants yielded 800 (I think) tomatoes last summer. There were several photos of tomatoes of different varities arranged in a spider and a car and other such shapes. Sadly she didn't get time to make chutney.

Morag doesn't just have interests and work; she lovingly and wuite passionately combines the two. She paints, a lot and in her work to she paints. Many of the exhibition she has done have been painted by her and her assistants. And that's another thing, which I found quite surprising. Morag, get her hands dirty and rolls up her sleeves often with her mate Luke, who builds and paints too and her dog, Lemmy. Why does she do it herself? Well, so that they ideas can come to fruition and because of the often tiny budgets for the work she does.

And see the lovely poster, No Airs and Graces, it has been cut and pasted. If you don't know what that means, ask an older designer. I have only ever heard of it and have yet to do it myself. But that they beauty of the low tech (possibley cheaper but NOT CHEAP) way Morag works, it works. It feels right. Even when she was stapling captions with hand drawn stencil lettering on them at the last minute before the exhibition opened, it looked and felt right. Another great example was the Africa exhibition by David Adjaye. These photos, yep those, printed at Snappy Snaps. I kid you not and hanging on the ceiling is tissue paper which makes the exhibition for intimate and focused because the "ceiling was too high".

It the little things with Morag and the really big things. All the exhibitions have models made and the client at the exhibition collected coins.

There is just one more thing that is worth mentioning.

For this work, Morag did for the Westminster Academy, I was charmed by what she said about why there was not wayfinding in the building. Part of it, is that Morag does not like wayfinding too much and another part is that, if someone of the street walks into the academy, why would you want them to be able to find their way around the school. For anyone who goes to the school, they know where everything is and for any official visitors, they will be shown around the school. Quite right really.

I could and in fact would like to wax lyrical about Morag Myerscough. She is the bomb, the s**t, the biz, the deal. And she is real and herself and really bloody taleneted. Especially with her 1920's bob and red lipstick.

Supergroup.
Posted by Isabella Fernandes at 08:32

Currently working at Redwood.
You can see some of my work here
Cheers